It has been years since I have written.  Mostly, because I have been demoralized to the point of silence with everything that has happened/been happening in our world.  Counterintuitive, yes, but such an excess of material to work with overwhelmingly depressed me.  My muse for this entry you ask? Uh, read the title.  Westworld, thanks for bringing me “back online.”

Westworld is a mind blowing HBO series, killing it in its freshman year with an average of 11.7 milion viewers (more than Game of Thrones in its first season).  Inspired by the 1973 same-named film, written by none other than Michael Crichton…RIP–you will always be the man.  Season 1 has 9 episodes, and the finale was last Sunday.  The good news is it has been renewed for a second season, the bad news is that we may have to wait until 2018.  Help!!!

For those who don’t already know, Westworld is A.I. all the way.  Hold on, hear me out.  The premise: humans build a Western-themed amusement park and fill it with android hosts that/who set the line between you/me and machines ablaze.  For an easy $40,000 a day, crazy rich park guests can find out who they truly are (i.e. guests can rape/torture/kill hosts at their leisure).  Or not.  But usually so.  Every night host memories are wiped and dead hosts revived, so they can live another tomorrow of horrors without anyone feeling bad or guilty.  The memory erase speaks to how human-like the hosts are–they feel pain and can suffer.  Which makes everything that much more super messed up.  Of course, glitches (intentional or not) ensue and the REAL joy is finding out who and what we are as we watch these machines struggle through personalized mazes to self-awareness aka consciousness aka humanity.

Cyborgasmic, amiright?  This pulse-thumper also showcases a boatload of eye candy, talent, and train wrecks you can’t help but stare at, including:

1) Evan Rachel Wood is host Dolores Abernathy, the ingénue enigma (LOVE her…Wood was previously engaged to Marilyn Manson FYI); 2) James Marsden is host Teddy Flood, the sensitive hottie; 3) Thandie Newton is host Maeve Millay, the Madam; 4) Sir Anthony Hopkins is Dr. Ford, the brains behind the park; 5) Jeffrey Wright is Bernard Lowe, the host version of “Arnold”; 6) Ed Harris is the Man in Black, the villain with a cause; and 7) Jimmi Simpson…who I’d consider dating...is William, the young Man in Black.

Westworld’s mind blow factor is present because at any point in time, you are asked–no, begged–to face every sense of your reality.  Great segue, if I may say myself.

There are several timelines in play.  For example, Dr. Ford relives the happiest time of his life by creating host versions of him and his family from his childhood.  Occasionally, he is seen hanging with the fam in a secret part of the park, and engages in vague banter with his younger host self.  That’s nice.  Also, hosts are hanging on to bits of memories, so are they living in the present, or in a flashback?  Dovetail to the cherry on our sundae, we find out that we have watched things unfold on multiple timelines.  Confirmation that Man in Black=William was a-mazing.

Yes.  There’s the whole A.I. thing with host metrics such as intelligence, emotions, trust etc. that can be adjusted with the flick of a finger.  Cool beans.  Yet, Westworld has us more focused on what sets us apart from these feeling/suffering/loving hosts who like Pinocchio, just want to be real goddamnit.  In fact, with the whole nightly memory wipe, we almost long to be a host à la Eternal Sunshine of the Spotless Mind.  Not only that, but they can be revived whereas we can die…like, permanently.  Maeve threatens to kill a human in the most eloquent way, asking him (paraphrased): you think I’m afraid of death?  I’ve died a hundred times.  How about you?  However, as Bernard and Dr. Ford put it, how can you evolve and truly be human without consequences or self-awareness, mistakes or suffering?  Daily abuse aside–a pretty good sell as to why being a host is better.  At least to people like me who avoid emotional pain at all costs.

The finale: where do we go now that Dr. Ford has been shot in the head?

Ok, that wasn’t really a spoiler.  Hosts die and come back all the time (it’s their job), and we see dead people recreated as hosts.  Plus, was that the real Dr. Ford?  Or host Dr. Ford?  Though since there are a lot of heavy hitters here, it troubles me that there could be major cast changes like in True Detective.  That was sad for me. 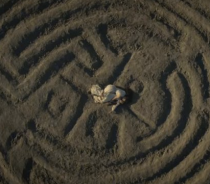 Yamaybe.  But the options of what the center of the maze could be/represent, are limited…by nothing other than our little minds.  Dolores, however, delivers the cheese rather beautifully.  In her almost always quivering voice (not as annoying as one would imagine),  Dolores realizes that the center of the maze–the key everyone is hot and bothered about–is that the voice guiding her decisions and actions is her own, not that of Dr. Ford/unknown source.  .  We see hosts evolve, starting to make decisions based on the memories they can string together.  By “starting to make decisions,” I mean in a pick your adventure type of way.  But, it won’t be as easy as that.

I suppose the biggest finale shocker is that Dr. Ford and the Man in Black are the “good” guys because they want to liberate the hosts (allegedly)…which is a little weird, since they are serious deadbeats the entire time.  We have Dr. Ford who forces the hosts to be human by keeping them in a daily hell of rape, torture, pain, suffering, and/or murder.  Then, we have the Man in Black who perpetrates all of the previous inhuman things for fun while trying to figure out how to free host minds so they can fight back.  Terrible ideas, all around, for an amusement park.  Especially now, since it appears that the hosts will be poaching the park’s guests.  Très Jurassic Park with a sadistic twist.  I mean, not that I agree with said park, but let’s be honest.  About 11.7 million viewers are watching this with me.

I’m dying to know where we are going.  Like are we going somewhere?  Or should I be paying more attention to the road?  There are the possible token outcomes i.e. A.I. is used to control the world, as weapons of war, for servitude, as replacements for loved ones, or playing out the whole humans will be replaced by robots business.  Maybe, Westworld will dally with religion more (though I like how they’ve kept it to a tickler).  In the finale, the hosts are like, these humans–these gods–are no big deal.  They die.  In nasty ways if the hosts have anything to do with it.  One has to wonder how or why the hosts know/understand, or are programmed to know/understand, the concept of god[s]/God specifically.  Nevertheless, Dr. Ford is also like God didn’t really create humans because Michelangelo shrouded God in the shape of a brain.  Apparently, in real life, this was pointed out by a gynecologist.

With the church, the church basement where everything came to be, the church being so close to the center of the maze and leading us to the maze, the church being covered with sand and then not, and some things Dr. Ford said, maybe we’ll see how religion came to be amongst us silly humans.  There are also potentially other worlds, like “Samurai World.” But eh, “it’s complicated.”

Anyway, the other thing you should know is that the soundtrack kicks serious butt.  Did I fire Napster and hire Spotify to hear it?  You bet.  Think haunting, twisted, orchestral scores and Western automated piano renditions of classics like Paint It Black.  Rock on Ramin Djawadi (also known for GOT).  You are #thebossman.  And very good looking as well.

Thank you Westworld, for allowing me to find entertainment in my life again.