It’s official.  The House of Representatives has voted that Speaker John Boehner (not to be confused with sext offender, former US Representative Anthony Weiner) can sue President Obama.  Although Boehner asserts “[t]his isn’t about Republicans and Democrats…,” he is, of course, wrong.  The 225-201 vote on Wednesday was down party lines.  Only 5 Republicans had the sense to side with the Dems. 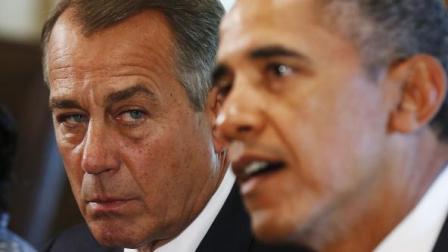 This particular hot mess is over executive orders, essentially where the president writes something down that has the force of the law.  Roosevelt issued 3,522 orders and George W. Bush issued 291.  Obama is at 183, which is actually fewer per year than any president since Grover Cleveland in the late 80s.  Hey Congress, you gridlocked?  How about a little executive order in your face?  Republicans are not on board with any of it.  Some orders, such as the negotiating with terrorists one, are toughies.  However, Republicans are focusing on the President’s “unilateral changes to the Affordable Care Act, known (now ironically) as Obamacare.”

Republicans, I get it, you’re caught up in the moment.  With a country so divided, it’s tough to jump off the party boat.  But, you’re losing me on this whole Obama is bad enough to sue but not bad enough to impeach action plan (uh but I also don’t think you should impeach Obama).  What are you hoping to happen?  That Obama learns his lesson and stops making executive orders?  Spoiler alert: he won’t.  And hold up.  Does Obama’s salary come from taxpayer money?  Are you using my money to sue me for more of my money?  #wtf.

Setting aside any opinion about the war in Gaza (pray for #peaceinthemiddleeast), I’m going to offer a solid quote by Israeli Prime Minister Netanyahu “…a society is tested not by the extreme fringes of that society, but how it takes care of them.”  To clarify, moving towards the fringes is frowned upon.

Republicans, your move to sue Obama, real fringy.  FYI–when people call you fanatics and/or fringy, it is not a compliment and it is not because they are jealous of you.  Our President isn’t perfect.  He is, after all, just a man.  But 99% of you are probably lawyers or have sued someone or have been sued.  Or at least read the news or watch TV.  You know how much money and time lawsuits consume.  Appeal the orders, negotiate, there are other options–we’ve resolved more and less serious issues without this lukewarm resource-wasting lawsuit junk.

Especially with everything going on in the world, you’re doing exactly what you are trying to prevent.  When thinking about the oaths you took–57% of Americans do not agree with what you are doing–and this is something totally in your control.  It’s hard to believe that at any time in the future, any one will look back to reflect, wow, that move to sue President Obama…really outstanding, so tremendous.  Think about that Republicans.  You can still do the right thing.

P.S. To cheer you up….a mom took the most adorable photos of her 10-month-old baby and their rescue dog: